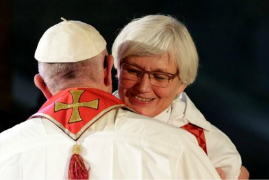 On August 2, 2016, Pope Francis instituted a commission to study the history of the female diaconate, for the purpose of its possible restoration. And some have seen this as a first step toward priesthood for women, in spite of the fact that Francis himself seems to have ruled it out absolutely, responding as follows to a question on the return flight from his journey to Sweden last November 1 (in the photo, his embrace with Swedish Lutheran archbishop Antje Jackelen):

“For the ordination of women in the Catholic Church, the last clear word was given by Saint John Paul II, and this holds.”

But to read the latest issue of “La Civiltà Cattolica,” the question of women priests appears to be anything but closed. On the contrary, wide open.

“La Civiltà Cattolica” is not just any magazine. By statute, every line of it is printed after inspection by the Holy See. But in addition there is the very close confidential relationship between Jorge Mario Bergoglio and the magazine’s editor, the Jesuit Antonio Spadaro.