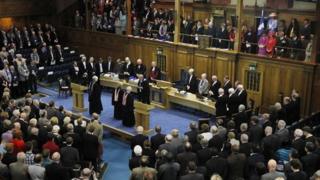 Gay marriages may soon be able to take place in the Church of Scotland.
A report to be debated at the Kirk’s General Assembly in May said ministers should be permitted to perform same-sex ceremonies.
It also said the Kirk should apologise for failing to recognise the Christian vocation of gay people.
The report has been welcomed by Scott Rennie, the gay minister whose appointment to an Aberdeen parish in 2008 caused controversy.
It will be presented to the General Assembly by the influential Theological Forum of the Church of Scotland, which challenges and expresses the theology of the life and work of the Kirk.
It said in its report: “We recognise that as a Church we have often failed to recognise and protect the identity and Christian vocation of gay people and believe that the Church as a whole should acknowledge its faults, whose identity and Christian vocation it has failed to recognise and protect.”