In the USA, as the rich got richer and the poor stagnated, globalisation has been blamed – contributing to the rise of Donald Trump. Evidence from elsewhere is that it ain’t necessarily so. This graph shows that in stark contrast to the US, in the Netherlands, it was the poorest households that saw the  strongest growth in income. 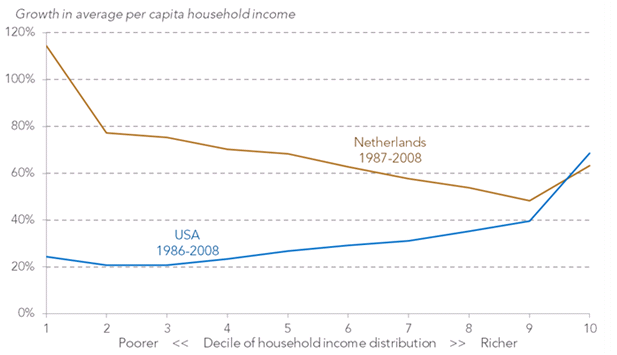 In yesterday’s election, the Dutch electorate saw off the threat from their own yellow haired anti-immigrant populist politician. No co-incidence?

The graph above is included in a December 2016 paper by Torsten Bell and Adam Corlett for the Hans van Mierlo Stichting, arguing that the adverse impact of globalisation on poorer Americans (and British?) implied by the “elephant curve” is not inevitable, but the result of poor policy decisions.

The globalisation debate too often gets simplified into a claim that working people in Western countries have seen their incomes stagnate in recent decades. But the evidence doesn’t support this simplistic case against globalisation. Yes, trade and migration bring with them challenges, but a more equal distribution of growth also depends on domestic policy choices.