NOT far off the coast of Guam lies the deepest point on Earth’s surface, the Mariana trench. Its floor is 10,994 metres below sea level. If Mount Everest were flipped upside down into it, there would still be more than 2km of clear water between the mountain’s base and the top of the ocean. 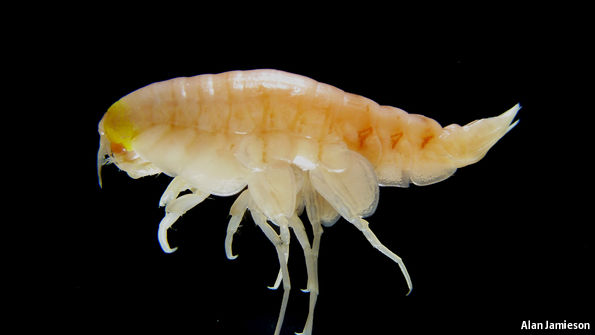 Such isolation has led many to assume that it and similar seabed trenches will be among the few remaining pristine places on the planet. However, a study led by Alan Jamieson of Newcastle University, in England, has shown that nothing could be further from the truth. As Dr Jamieson and his colleagues report this week in Nature Ecology and Evolution, trenches are actually loaded with pollutants.

Despite the cold, the darkness and the high pressure, ocean trenches are home to ecosystems similar in many ways to those found on other parts of the planet. In one important respect, though, they are different. This is the source of the energy that powers them. In most ecosystems, sunlight fuels the growth of plants, which are then consumed by animals. In a few shallower parts of the ocean, hydrothermal vents provide energy-rich chemicals that form the basis of local food chains. No vents are known to exist below 5,000 metres, though, and no sunlight penetrates a trench. The organisms found in them thus depend entirely on dead organic material raining down upon them from far above.

Since these nutrients, having once flowed into a trench, never make their way out again, Dr Jamieson found the notion that trenches have somehow remained untouched by human activities questionable.